Here’s another blog posting I wish I could reblog with photos, but I’m hoping that just posting one photo borrowed from Robert Robertson/Kirk D. will be permissible: 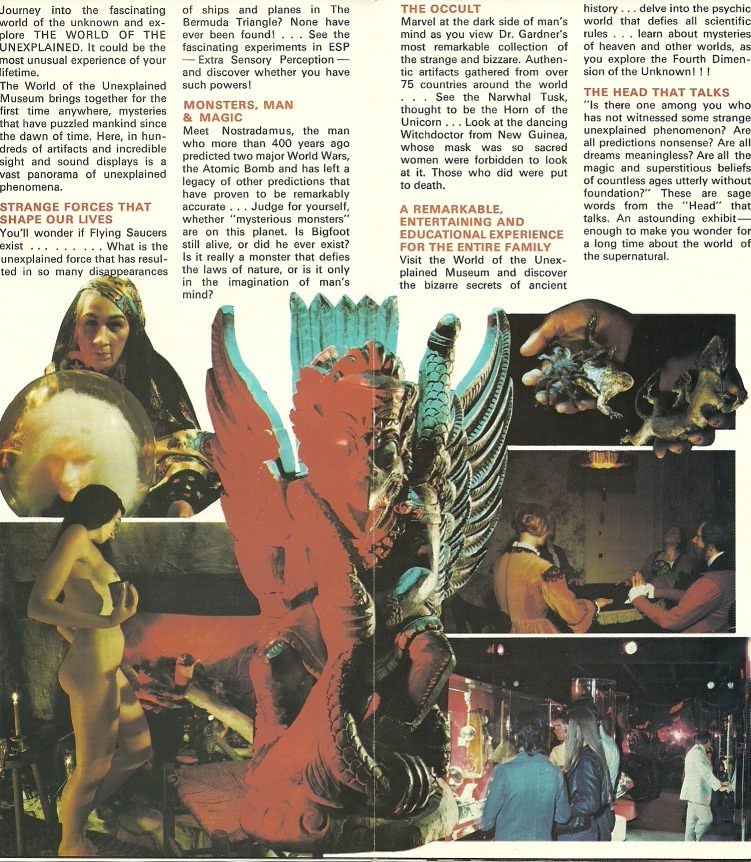 The Museum of Witchcraft and Magic – page 2 of the brochure

Thank you to Kirk D. for the blog posting! http://secretfunspot.blogspot.com/2011/12/world-of-unexplained-museum-brochure.html

I just wanted to make a few comments about the now-defunct “WORLD OF THE UNEXPLAINED” museum in Gatlinburg, Tennessee. Please note that the original name of this was “The Museum of Witchcraft and Magic”. Makes a huge difference. Apparently, back in the day, local churches didn’t like the museum name, so Ripley’s company changed it to a milder title.

I had the privilege/horror to go to this museum in 1972.

You wanna talk about “nightmare fuel”?! Holy God, pardon the pun, this place is the scariest place I’ve ever been to in my life! Granted, I was but a child when I went, but the images were grotesque and horrifying, and I seriously remember them very distinctly and clearly after 41 years. Does that tell you something?

No, I’m not saying people who practice wiccan/witchcraft/pagan traditions are terrible, just the images and spooky factor they added inside were seriously meant to freak people out, as were all the noises. Example: in the above brochure excerpt, there’s a fortune teller over a crystal ball with a head in it – a head??? I believe the brochure refers to it as “The Head That Talks”. That picture does it no justice – dude, that head TALKED!! Ingenious, they used a hologram to project into the crystal ball and it looked like a headless old woman saying terrifying things, and she howled and cackled and screamed! I remember screaming bloody murder and hiding behind my mother when the head started talking. Seriously, guys, that’s the shit nightmares are made of.  Ever want to scare intruders? Set up one of these things in your house and never have fear you’ll be robbed.

My childhood psyche is forever tarnished by the noises, the horror and sinister images in there. I’d probably laugh if I saw these things today, but damn, that was messed up ish, right there! I wish there was a place in the US like that, although Ripley-based museums kinda fulfill that void today. Ah, the memories…scary, though they be…

“Unbelievable: Remembering Chicago’s Ripley’s Believe It or Not! Museum”

NOTE: I wish there was a way to reblog this entire post with photos included, but anyway, I’m hoping you guys will check it out – kinda spooky!! Thanks to Mr. Dan Kelly for all the ‘nightmare fuel’ memories!

I can’t believe Thanksgiving is around the corner – where has the time gone?!

Thank you for buying this card. I scanned it from an old Victorian post card and I’m hoping the printed copy captures the look and feel of vintage 🙂

Awwww yeah!
If I can’t go vacationing with you, at least I can go vicariously with two of my luggage tags!

Ramblings From an Apathetic Adult Baby